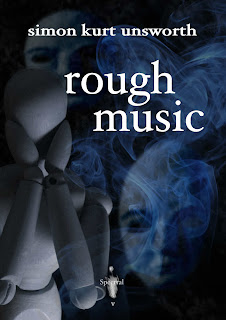 I've had the good fortune to read and review the first four chapbooks from Spectral Press, so when I received a review copy of their fifth I was really looking forward to seeing what they were offering to readers this time around. As it turns out, Simon Kurt Unsworth brings a literary horror romp that acts almost like a prelude to his impending collection of stories that will be coming out through Spectral Press next year. The guy already has quite a few collections and anthology contributions to his credit, and after reading this story it's pretty clear that I need to find more of Simon's work.

This story, clocking in a little over twenty pages long, involves a married man named Cornish who wakes up in the middle of the night to sound of wood banging on metal somewhere outside his townhouse. He looks out his window to the street below and sees a man wearing a bulbous-shaped mask over his head, dancing a little jig, and banging a wooden spoon on a pot. The guy does this for a while then takes a bow and disappears into the darkness. Imagine seeing that outside your window. Strange shit, right? Well, it escalates.

As the nights press on and the racket outside becomes louder and louder, Cornish learns that his wife doesn't hear a thing, in fact it seems like he's the only guy on the block who can hear the cacophonous concert in the middle of the street. Each night, the strange man in the mask is joined by more and more masked performers until it winds up there is a play of sorts that is playing out each night, and Cornish realizes that it echoes facets of his own life, and the masks resemble those of his neighbors and friends. At the same time, his relationship with his wife is reinvigorated and more passionate after months of a wedge between them, in the wake of a transgression on his part. But the disturbing music and dancing outside his house, despite whatever influence it is having on his mood and relationship with his wife, it depriving him of his sleep--and maybe his sanity.

Yet again, Spectral Press finds a gem of subtlety and escalating strangeness to offer readers. I was really impressed with the way Simon used the mirroring of Cornish's life with the mummer performance outside his window. The ending was a bit abrupt, but it definitely achieved the kind of awkward terror I think he was aiming for. I'll definitely have to keep an eye out for more of his work in the future.
Posted by Unknown at 10:46 AM