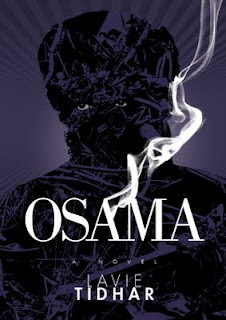 In the interest of full disclosure, I admit Lavie's someone I know and interact with online. I received an electronic review copy straight from the author himself. That said, Tidhar's new novel, Osama (PS Publishing, 2011), is a difficult novel to review without spoilers. I will do my best here. But let me just say upfront that I loved, loved this book! Sometimes when getting a book from a friend or acquaintance, there's a hesitance to review it because of the risk of hurting feelings. There was no need to hesitate reviewing this one.

On a superficial level, at least through roughly two-thirds of the novel, the story is pretty simple to explain. It is about a private investigator named Joe living in an alternative present where 9/11 and The War on Terrorism are the stuff of pulp novels. Osama bin Laden is a popular character in a series of cheap paperback thrillers detailing the lives of terrorists by an author named Mike Longshott. When removed from reality, the exploits of the terrorists make for entertaining reads in this alternative history. There are even conventions dedicated to Longshott and his Osama novels. People dress up like Osama and terrorists at these conventions and have roundtable discussions concerning the social relevance of these novels, much like at a Trekkie convention. The fictional acts of terrorism are all entertainment, nothing to fear.

Joe's story itself reads much like a paperback thriller. He's a hard-drinking, smoking private investigator searching through the seedy underworlds of Europe. Joe is hired to track down Longshott and travels around the world looking to uncover this author. In the process, he starts to learn a thing or two about himself.

The last third of the book is full of revelations. Our reality and Joe's alternate reality collide and the text grows increasingly slipstream and surreal. I won't say anymore about plot because I don't want to spoil the experience for anyone. The less one knows going into this novel, the more they will enjoy it, I believe.

Ultimately, this is a novel about identity, a novel which reflects a reality of the modern age in which we live. We choose our identities in many aspects of modern life – whether it be through a pen name as a writer, the personas we take on in differing social situations, or through online handles and avatars. As one character states in the novel:

"'You have to choose what to be. When you've been stripped of everything; a
name, a face, a love – you could be anything. You could even choose to be
yourself.'"

A wonderfully entertaining and thought-provoking book – My six pack rating: 6 out of 6 Trader Joe's Vienna Style Lager
Posted by T.J. McIntyre at 2:23 PM