Spectral Press started out this year as a new imprint dedicated to short works of horror fiction, inspired by the classic tales of the late 19th and early 20th centuries, while still looking forward for today's brightest writers with new ideas and new approaches to instilling terror in readers. But, with three issues now out, how close have they come to backing up their claims of providing high quality stories? 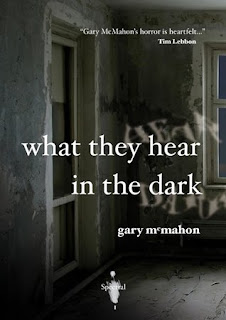 What They Hear in the Dark by Gary McMahon
I've got a brand new Gary McMahon novel sitting on my bookshelf waiting to be read, but for some reason I haven't put it at the top of the heap. After reading this story, maybe I ought to reconsider. A married couple buy a big ol' house in the wake of their young son's death. It's a fixer-upper, it'll keep them busy, help them get some closure. But we all know closure is hard to come by, especially when the house you move into has a room that shouldn't exist. The Quiet Room.
I am a sucker for a haunted house story, and this was is one of the best I've read in the last year or more. Rob and Becky, the couple living in the house, offer two stark views of the room and what it means to each of them. Rob hears absolutely nothing, barely his own thoughts, but feels a sinister force somewhere inside the room whenever he is inside it. While Becky has convinced herself the spirit of their dead son is in there. Whether there is something in the room or whether Rob and Becky are projecting pieces of themselves into its void, that's one of the questions that lingers. 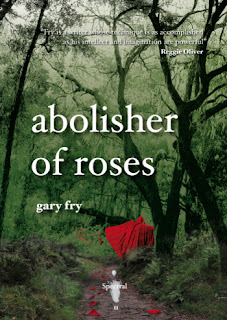 The Abolisher of Roses by Gary Fry
I'm unfamiliar with Gary Fry's work, this being my first chance to read his stuff, and it seems I will have to make it a point to find more. His story revolves around Peter, a stodgy businessman, who winds up being dragged by his wife Patricia to an outdoor art exhibit. He'd rather be off cavorting with his mistress, but entertaining his wife's interests from time to time seems to keep the marriage together. But, Peter strays from his wife and the lone path in the gardens out of frustration and discovers artwork that feels too macabre and too personal to belong with the rest of the exhibit.
This was easily the creepiest of the three volumes, as Fry's story gives a bit of the ol' down-the-rabbit-hole vibe, as Peter wanders further into the woods. The guy has such an alienated reaction to the mediocre art he is used to seeing, that when he sees the grotesque and uncomfortably intimate artwork he finds off the beaten path, poor old Peter's sanity has trouble maintaining a foothold. For the mere idea of liberal arts driving a stuffed-shirt conservative to the brink is enough to make me enjoy this one, but Fry goes a wee bit further in scope with this story. 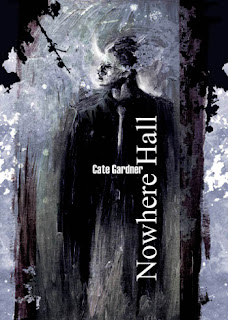 Nowhere Hall by Cate Gardner
The men in pinstripe suits aren't the only strange things populating Cate Gardner's imagination. With Nowhere Hall she offers up a building as unsettling and unraveling as Stephen King's Overlook Hotel--The Vestibule.
Ron is having an off day. So off, in fact, he's contemplating a slow walk through busy traffic. But instead of stepping off the curb, he turns back towards the gleaming white hotel at his back, the Vestibule. Drawn to it, both by a want for shelter and the allure of a beautiful woman who steps inside, Ron goes inside after catching a mysterious umbrella that fell into his waiting hand. Inside, the surreal goes up another notch, with the hotel appearing abandoned and brand new at the same time, mannequins seem to come to life, and the hotel's concierge knows more than he's letting on.
Where Gary Fry's story had a bit of the Alice in Wonderland, Cate's story had it by the bowlful. Nowhere Hall felt like the kind of story Rod Serling would have written if he had a poet's heart--and a hit of LSD. It's a sad song sung slightly off-key, which manages to make it all the more haunting.
Posted by Unknown at 11:37 AM